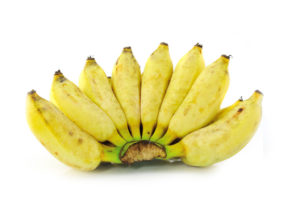 People have been eating bananas for a long time. The first written references to them come from 500BCE, but were most likely consumed long before then.

Today, 100 billion bananas are consumed globally each year. There are more than one thousand varieties of bananas. -- Source

In North America and Europe there is a preponderance of a particular kind of banana, mostly imported. This is the Cavendish, known in Thai as gluay hom (กล้วย เหม็น). However, there are many, many cultivars of bananas throughout the world.

As I have lived in Thailand and Hawaii, this will mention a few of the more popular bananas found in those locations. Worldwide there are perhaps 500 to 1,000 cultivars of bananas, though there is less genetic diversity between some cultivars.

Contents
Bananas in Thailand
Wild Bananas aka Seeded Bananas
Nang Tani นางตานี a Thai Ghost
From which end do you peel your banana?
Bananas in Hawaii
Cooking with Bananas

There are several types of bananas available in local markets. Thailand (like Hawaii) is a paradise for bananas, and they grow abundantly.

It is also common to see red bananas, Gluay hak muk aka Silver Bluggoe (cooking banana but not a plantain), and also 100 finger (Gluay roi wee) bananas (though those are much less common in the market). And there is also the notorious Gluay tani กล้วยตานี wild bananas (see below).

Gluay tani กล้วยตานี is a wild banana, with seeds. Also called seeded bananas in Indonesia, and native to Indonesia and the Philippines, its fruit is shorter and more round. Gluay tani is not considered edible in Thailand, though its leaves can be used for packaging and crafts.

In indonesia, there are traditional dishes made with seeded bananas including baking and smoothies.1 Actually there are several different wild banana species, at least eight and possibly more. Many of the wild banana varieties such as Gluay tani dam กล้วยตานีดำ, Gluay tani kao กล้วยตานีขาว, etc., have been grown for animal fodder, handicrafts and packaging.

Seeded bananas are thinly sliced so the stones are easily removed. Mature bananas are peeled, and the meat is separated from the seeds and used for baking and in beverages or smoothies. The local Javanese have used Seeded bananas for digestive troubles and stomach aches for centuries. Seeded bananas can be kept at room temperature for up to two weeks depending on state of maturity.* Seeded bananas 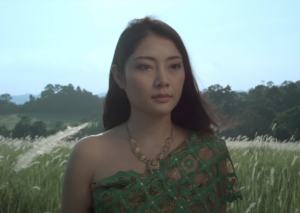 Thai people have a ghost called Nang Tani นางตานี. She lives in the gluay tani (wild banana) trees. She appears as a green beautiful, but jealous, woman. Thai people sometimes wrap colorful cloth around wild banana trees she is thought to frequent.

Nang Tani makes an appearance in this advertisement

From which end do you peel your banana?

Thai people peel and eat bananas upside-down ... the banana, not the Thai. That is, Thai people take a banana with the stem pointed up, and turn it upside-down (stem pointing down), then peel from the top (bottom) of the banana. This is a slight shock to a North American or European. Why do it that way? Well, freshly cut bananas have a sticky sap coming from the top, so it should be avoided.

In North America and Europe few bananas are peeled just off the tree, but instead are mostly imported from warmer climates. The importation process dries out the stems so sap is not a problem. Living in a tropical climate where bananas are freshly grown and picked regularly tends to produce different habits that take into account the climate, such as how one peels one's banana.

Observing other primates, they always peel their bananas from the bottom.

Bananas are not native to Hawaii (not much is). However, the islands are now covered in bananas. The most popular there is the apple banana (yes it tastes like apple), and the ice cream banana. Of course Cavendish are also present, as are many more. 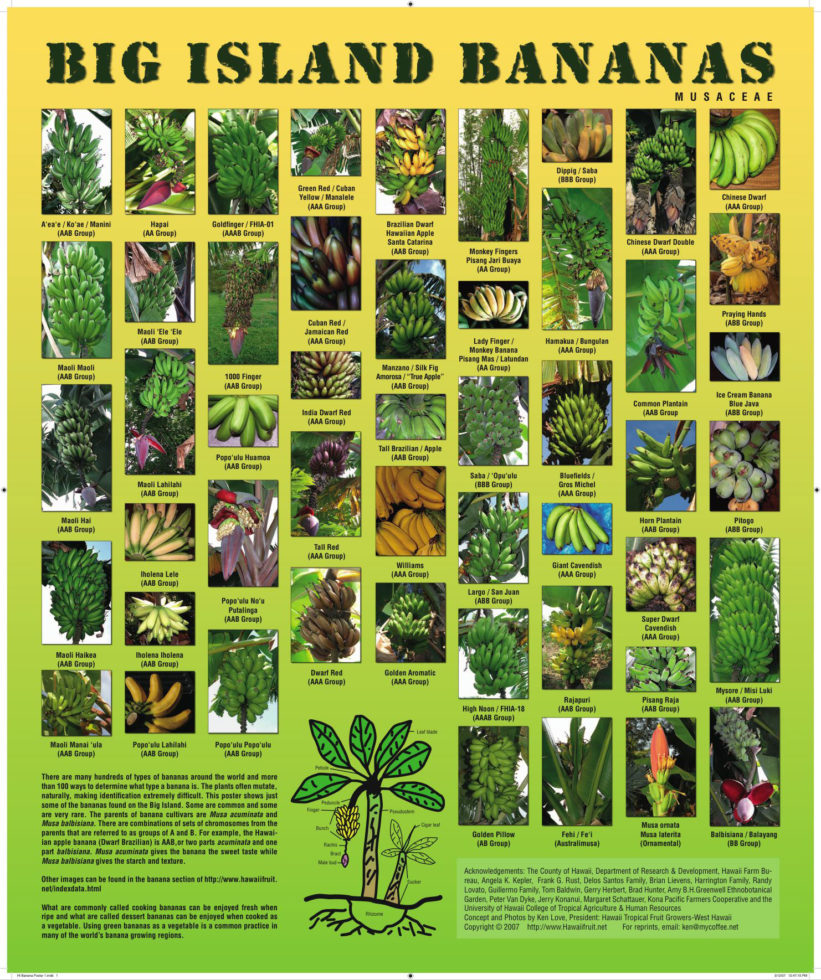 I prefer only a few dishes with bananas, besides eating them by themselves:

It is by logic that we prove, but by intuition that we invent.