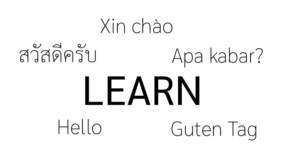 Learning second, foreign, or other language as adult is not uncomplicated. First, we need to review what we actually know about learning languages, and learning them as an adult (as there is a significant difference between how children and adults learn languages).

What we don't know about l;earning a language

First off, we need to clear away the detritus of what we don't actually know (but think we do). There are hundreds, if not thousands of so-called experts who promulgate various products and services to assist in foreign language learning, not to mention the various books and applications both recent and decades old.

What we do know about learning a language

Each language has different sounds, and even similar sounds are made differently and have different sound-producing styles. For example, French is produced more with the front of the mouth, German is more gutteral, Indonesian has more of a wide smile when forming sounds, etc.

Time spent with sounds in the beginning will help reduce the amount of time needed to spend relearning sounds later, or simply having a fixed foreign accent that doesn't go away. When learning sounds it is important to train the ear and the mouth.

When learning how to hear, one must look at the face of the speaker, and they will look back and help with facial muscle correction. This is important, and is a critical part of how children learn to speak and learn vocabulary. Just having disembodied audio is not going to be effective. The goal is learning to listen and to speak.

Include tones when learning sounds

Use a phonics approach to reading and writing

For initial reading (and writing), use a phonics-based approach. That is, discover the discrete sounds of the language and match those up with specific letters and their combinations. Learning this mapping allows for learning how to read.

Some languages can have very complex rules. Thai has four different elements that together determine the tone of a consonant:

From alphabet to reading

From reading to writing

For writing, construct syllables and words in the same approach. However, sometimes the letters are written in a different order as the phonics approach (vowels written in front of consonants). In some cases vowels disappear based on the use of final consonants or second syllables, therefore learn writing rules that include not writing letters.

Use native language readers and workbooks meant for children

Readers meant for children better take into account a limited amount of focus available, and so deals with one thing at a time. The material is as simple as possible, yet complex enough to produce meaningful acquisition. There is a better scaffolding of the language than with non-native or adult-oriented learning material.

Teaches the culture along with the language

Learning the same material that schoolchildren learn helps build up the cultural basics that every native speaker already has.

For fluency, there is a need for both general vocabulary that includes high-frequency words and the root words that are found in word families.

Has images and a focus on visual storytelling

For those who need to learn technical language, business, or academic language then obviously children's readers and workbooks should be supplemented by those specific written works and vocabularies. There are lists of common words that can be used for study, and then of course focus on the authentic works that are meant as the focus.

Comparative information is a key to freedom.