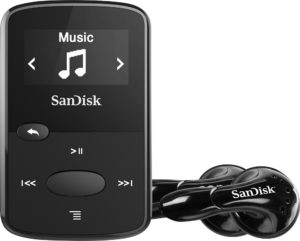 My review of the Sandisk Clip Jam is a lament to SCJ Playlists:

Since playlists are important for portable media players, they should have a well-thought-out approach. Unfortunately this is not the case. One has to monkey about with .m3u files and actually edit them by hand. Sad and a bit nuts as well.

The namespace is effectively 7 characters, so don't have directories with playlists that might conflict on those first 7 characters.

There are three "quick" playlists but no way to get them out of the way, so there is always "click, click, click" to get past them since they are the first three. I don't care to make playlists on the go, so please let me make these go away.

Unlike as stated in the documentation and forums, the music files do not need to be in the same directory as the playlist file, and they can be stacked all in Music with referenced directories and subdirectories underneath.

Obviously this is a nasty and brutish way of handling playlists, and so various scripting is needed to get things working without a huge amount of ongoing time being wasted.

Also, the cheap and huge earbuds (unwearable in my medium-sized ears) are really a waste. No one really expects anything good to be bundled, so save the earth a little.

Overall the device itself is pretty decent, except for the glaring problem noted above.

How to Create and Edit SanDisk Clip Jam *.m3u Playlists

The key is to use a media player/manager to generate the *.m3u playlist, and then search/replace to change the paths in the files to match that of the Sandisk Clip Jam, which is generally Music/Artist/Album. Since my audio library has the very same structure, it is not difficult to copy entire albums and artists (with their albums) to the Sandik Clip Jam.

Note: VLC can also perform the function of generating playlists, though my choice is Quod Libet, using the Export as Playlist plugin which generates an *.m3u file.

After creating the playlists and editing them, copying wholesale the directory structure into Music root directory with relative paths, completes the operation. Updates begin in Quod Libet and then a delete/recopy is necessary (akin to Ipod/Itunes operations)

Using a Script to Create a Playlist

It is possible to create a script that will include all audio files for a given directory and subdirectories.

Freedom of the press is guaranteed only to those who own one.