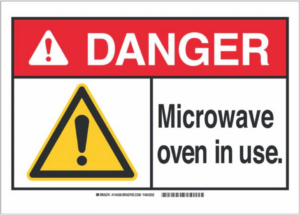 Cecil from The Straight Dope has an article from 2005: Does Microwaving Kill Nutrients in Food and is Microwaving Safe. The result of the article is actually that we don't really know for sure but research is being done. With that in mind, we proceed.

What is a Safe Microwave Oven?

Safety is a tricky thing. For legislators and manufacturers, safety has to be defined and then measured. With Microwave ovens, the definition is based on rates of microwave exposure. As well, there are safety issue regarding the proper use of microwave ovens. Finally, there is the actual mechanism of heating using microwaves. All three of these issues are how we should address the safety of microwave ovens in general and a given microwave oven in particular.

All radiation, that is radio waves, have levels of safety. In part these levels are based on amount of radiation over time. However, the FDA which has recommendations and even testing of ovens does not indicate what these levels are. The basic level of safety is determined based on the amount of microwave radiation that can be produced by a microwave oven, about 5mW, which is too little to cause damage to humans in a short amount of time. However, it admits that long-term exposure has not been studied.

Microwaves in large amounts can indeed be fatal, such as the amount emitted from a microwave radio transmitter. In 1981 a court ruling for compensation was upheld for a worker who experienced prolonged illness that was ascribed to his work as a microwave radio technician.

Of course, without studies, there is no evidence that it does not. And indeed, the ability to evaluate whether a given microwave oven is leaking radiation is not available to someone without specialized equipment.

Note that the Canadian government does indicate there is a risk of overexposure to microwave radiation from a microwave oven. In particular:

Federal legislation requires that microwave ovens be constructed to meet stringent microwave leakage limits and to have safety interlocks. When these interlocks are defeated, for example, during repair work, there is a risk of overexposure to microwave radiation.

Proper Use of Microwave Ovens

Next, there are certain kinds of hazards that are somewhat particular to microwave ovens, specifically the Erupted Hot Water problem:

The FDA received reports in the past of serious skin burns or scalding injuries around people's hands and faces as a result of hot water erupting out of a cup after it had been over-heated in a microwave oven. Over-heating of water in a cup can result in superheated water (water heated past its boiling temperature), which does not appear to be boiling.

This type of phenomena occurs if water is heated in a clean cup. If foreign materials such as instant coffee or sugar are added before heating, the risk is greatly reduced. If superheating has occurred, a slight disturbance or movement such as picking up the cup, or pouring in a spoon full of instant coffee, may result in a violent eruption with the boiling water exploding out of the cup.

Use of Microwaves to Heat

Finally, and this is where the real issue appears to lie, is the actual mechanism of microwaves for heating (which is by definition different from standard heating). This is an area that is much in dispute, including claims for and against microwaves degenerating the nutrition of food. Putting that aside, we do know a few things:

The breakage of phage genome DNA was primarily caused by the heat generated by microwave irradiation, whereas the phage DNA was not affected by the same temperature achieved by heat from outside. Thus we concluded that the phage-inactivating effect of microwave irradiation was mainly attributed to a thermal microwave effect, which was much stronger than a simple thermal exposure.

The body weight and gonadotropic ratio showed marked fluctuations whereas the sperm count from 2 weeks to 4 weeks showed significant reduction. After the replacement of treated food with normal food, recovery was observed. The gonadotropic ratio declined significantly. The level of deformities, like coiled tail, oval head, cytoplasmic droplets, and bifurcated tails, continuously increased with increasing duration of feeding of microwave exposed food food.

From these studies, we find that indeed microwaves interact differently on what is being microwaved, and that there can be a degeneration in organisms that consume microwaved food. Yes, these are initial findings only, but they point toward potentially significant hazards.

There are no obvious benefit from microwave ovens other than potential convenience and/or energy savings over other kinds of ovens. For reduced energy savings or faster cooking times, consider the various cooking innovations such as induction stoves and convection ovens, both of which consume reduced amounts of energy and provide innovative heating. Indeed, it is only microwaves that include potential dangers such as: superheated liquid explosions, physical degradation of in what is microwaved, and potentially detrimental effects on a consumer of the microwaved food.

Verdict: Do not use microwaves; not worth the risk; little if any reward.

Other References on Microwave Safety (And Lack Thereof)

There are many articles on microwave safety, some that have little evidence and/or poor reasoning. However, even though these can clearly be dismissed, the pro-microwave folks have little on their side to solidly dismiss all concerns, especially the ones on the mechanism and effect of microwaves on food (and human blood). Dismissive posturing may be self-satisfying but it isn't intellectually reassuring.

Knowing our strengths increases them; Knowing our weaknesses reduces them.