Inkscape is an amazing vector graphics editor. It is free and open source and works on a variety of platforms, including Linux, Windows and OSX. Inkscape replaces Corel Draw and Adobe Illustrator and can read their files, and is a first class citizen among these other editors.

In rough, this is the publishing workflow that gets books from conception/marketing to publishing and distribution.

EPUB documents are essentially a kind of html document as a collection of files which are zipped, and include html, css, images, and some XML pages. There are several ways of organizing these, but the most straightforward is one html document for each chapter (or section), a set of images organized in a subfolder, and a few metadata files regarding the collection. An epub document can be even simpler, and consist of a single html file, no images, and a few metadata files.

This Document Part of a Complete Set of Style Guides

NOTE: figure out how to merge / reference this with /markdown

This Text Style Guide is for all textual communication including email, website, social media, brochures, ebooks, etc. as well as all printed material. This guide includes markup style and writing style.

Tools change over time, but it seems that in the Epub world we have more of the same. As of November 2018: - Calibre's Epub Editor is pretty nifty - Sigil development stalled, then picked up again - Pagina Epub Checker is still under development and useful - Pandoc with or without some kind of ... Read more

Podcasting is growing (slowly) and offers a great opportunity for brand engagement. Generally free, the idea is to be where the audience already is, and have a reliable host for content and the rss feed. Media and RSS Hosting Soundcloud for Podcasting Google Podcasts and Google Play Music Podcasts Note, these are two different things: ... Read more

Yes, screen promiscuous, a term I did not know before reading the piece on Snowpiercer in the LA Times. Short and Longform Trends As John Borthwick reports there are two trends in media consumption seemingly at odds, lots of micro/immediate shortform content being consumed and reflected, as well as longform, quality content that has significant ... Read more

A famous writer (Borges) once said that he imagined the afterlife (or more precisely Paradise) to be a kind of library. However, what occurs to me now (in at once a banal and deeply moving way) is that not only the afterlife, but Life is a kind of Library. I mean this both as metaphor and allegory, but also as a framework which helps clarify certain things, such as information management, complexity theory, search engines, marketing, and other such avocations and vocational pursuits (including how to think about people's behavior). > I have always imagined that Paradise will be a kind of library. -Jorge Luis Borges

While there is quite a bit of literary genre everywhere alive and well, there are certain publication genre which are not. The Chapbook (still popular) and the Almanac(k), as well but we don't hear about it much anymore. 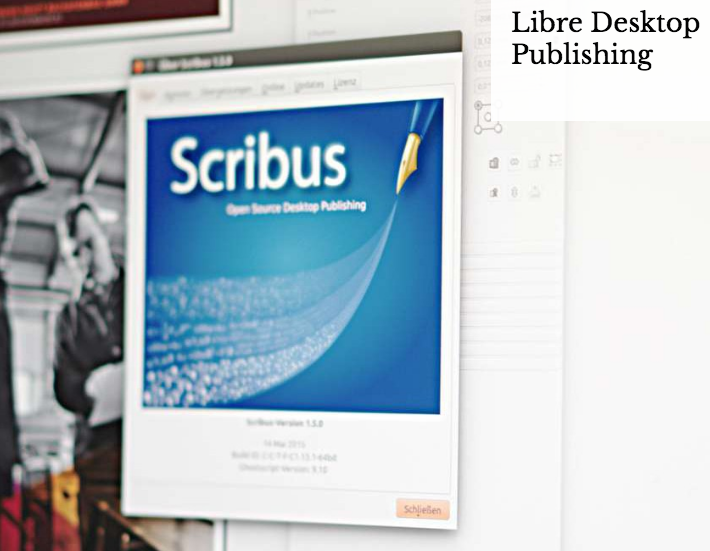 Scribus is a maturing publishing tool which has much to like. The upcoming (when? who knows?) release of 1.6 should put it squarely in direct competition with Adobe Indesign, it's proprietary competitor. Scribus is free and open source software, developed with love. However, there is one bad part which is the development lead who believes that new versions (e.g., 1.6) should be released over several years, rather than several months. Too slow for my tastes, though they are doing incremental releases at a faster rate, and frankly it is a nice piece of 'ware. > Note, my own use of Scribus fell down with several issues, including this bug that may not be around anymore, and I've gone back to an older approach using Inkscape for vector graphics and Markdown, Pandoc, and XeLaTeX (XeTeX + LaTeX, which handles unicode fonts and is the only real solution for non-latin script support) to generate epub and pdf programmatically. Scribus is basically damned awesome and should be tried out. It is the future (and possibly current) replacement to Adobe Indesign. Along with GIMP, Inkscape and Blender, Adobe can be retired (and I personally have not used any of their software since 2010 (and any Microsoft software since 2007).

To learn who rules over you, simply find out who you are not allowed to criticize.