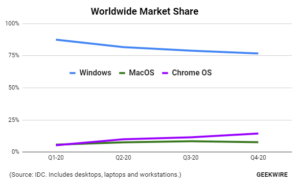 This makes sense as the strength of the ChromeOS is primarily in the education market, and that market exploded with demand because of Covid-19 school closures and the need for devices for remote schooling.

This is an overview of what Chromebooks, Chromeboxes, and Chromebits can do and are meant for.

What Chromebooks Can't (Yet) Do

Chromebooks and their kin essentally offer:

Strangely enough, Chromebooks are becoming both the promised netbooks, the best hybrids, and ultrabooks all at the same time. The combination of ChromeOS and access to the Google Play store Android apps are a game changer.

See also: Can a Google Pixelbook replace a laptop for photography?

This article originally dealt with availability of Chromebooks in and/or importing into Thailand. Now it has morphed (somewhat) into dealing with current Chromebook hardware specs in general. For a more general purpose article on ChromeOS configuration and applications, see:

There are basically four kinds of Chrome-branded hardware these days:

Where Microsoft Windows is strongest, the Chromebooks are weakest, namely device support. Try to connect up a printer or scanner that is not network-enabled and extremely rude sounds will quickly eminate.

As of early 2018, it seems that the Asus lineup is the best in terms of features and price/performance:

The C101 and C213 are the standouts, and about 10,000 THB and 12,000 THB with shipping into Thailand. These have a Rockchip in them, but should be fine for regular use. Personally I think the core M processor, while nifty, is ultimately wasted with a limit of 4gb of ram available.

These Chromebooks, and a number of others support the use of Android apps.

Update 05-Nov-2016 I've reached the conclusion that I will entertain no more underpowered devices as they are ultimately so limited their return on investment vastly underperforms overpowered devices. This means chromebooks are no longer acceptable.

Update 03-03-2018 The more recent (mid-2017) processor options for Chromebooks make them more viable. For a while some i3 Chromebooks were available, but these days (early 2018), it looks like the Celeron 3855U and Core M3/Core M5 options are what is available. Compared with my Macbook Air mid-2011 which has a 1.7ghz Intel Core i5 2557M, the Celeron 3855U is underwhelming, perhaps with around 70-80% comparative performance. Of course the RAM bandwidth and capacity makes up for a lot of that, to put it likely on par (especially if comparing, say, a 4gb Macbook Air to an 8gb, 16gb, or 32gb system, such as some NUCs. In that case, the i3 5010U is pretty much parity with the old Core i5 2557M. Interesting, considering that is 2015s contender, which comes bundled nicely in a barebones system the Intel NUC5i3RYH.

Background on Samsung Chromebook Use, Longevity

I've had a Chromebook for nearly 2.5 years (mine arrived in Feburary, 2013). It is one of the standard Samsung 11.6" 2gb models (there were only 2 or 3 choices back then). It really has done quite well, and the stability of the operating system is fairly good. For the last 9 months it has been being used by a family that has very limited technical ability, but they get good use out of it (mainly playing YouTube music videos).

Update 03-03-2018 The in-laws have been using this for another 2.5 years which means low-impact use of now 5 years, and still works well (largely, no doubt because of the use-case (websites and web apps) and the ongoing constant updates to the OS).

I imported this myself into Thailand, and then glued on Thai characters on the keyboard and shellacked with several layers of clear nail varnish. Worked well and only recently have I done another shellacking (so that lasted more than two years). No need to replace the actual stickers, which I think were only 100 THB in any case.

Local printing works for some drivers, not all (they have to be included in the distribution). Here are a few printers that work with Chromebookshttps://platypusplatypus.com/chromebooks/top-5-best-printers-chromebooks-2016-review/. Also, while it is possible to get an ipd scanner to work, generally cloud scanners and all-in-one printers that are Chromebook-friendly are the way to go.

Acer Chromebooks are Launching in Thailand

Well, no need for importing (though there is a price difference) as Acer Chromebooks are now launching in Thailand. The standard Acer models aren't bad (4gb ram, 13" and 15") though none of them have 1080p resolution. However, they are still more expensive than one can find on ebay (including shipping to Thailand). Prices start around 13,900 THB, on Ebay it is possible to pay around 10,000-11,000 THB including shipping for a 13", 4GB chromebook. There are many brands and models nowadays.

Also, there is a True IDC Chromebook now available.

This is a low priced currently available at 8,990 THB which has the same specs as my first Chromebook (11.6" screen, 2 GB ram) which actually works quite well. My old model which has been being used by my inlaws for the last 9 months still works fine and these people are not sophisticated users. The only problem the had was that "Accessibility" was turned on accidentally, so it tried to give audio feedback, zoomed in screen and touch-click. The device has been updating itself regularly and really has required no IT guidance.

Note that there are a very large number of Chrome Apps that work offline including Gmail and all Google Drive apps: Docs, Sheets, Drawings, Slides.

Update 03-03-2018 Currently using this old Samsung, now 5 years old, to update this post. My Macbook Air finally died (actually, a second death, due to battery expansion, yet again). Amazingly this old Samsung still works well. There are some timeouts to the second monitor over the HDMI port, but that is likely due to the battery being nonfunctional. However, plugged into power, it generally works well. It can do most things including bluetooth connections to a mac mouse and keyboard. The screen appears a bit worn out with some greying at the temples and brightness suffering a bit.

Lazada, the Amazon of Southeast Asia

Lazada certainly doesn't have the choice found in Amazon, but there are a few different options for Chromebooks on that marketplace, and it is worth looking at because of some advantages over Ebay and Amazon. The advantage over Amazon (and sometimes Ebay) is usually -- but not always -- price. The advantage vs. Ebay is usually -- but not always -- faster delivery, and also the ability to use options -- sometimes -- such as cash on delivery (the old C.O.D. option that I'm pretty sure no longer exists in the United States).

It is also possible to get a "chromebox" which is basically just a small box without keyboard/mouse/monitor. That way you could use existing monitors, keyboards, mice (USB ports + HDMI video - can use HDMI-to-VGA adapters for older monitors).

My sense is that these price points are much better for certain segments than a small or even large tablet. The classroom, business environments, anything with heavy text and graphics interaction, and the need for precision and speed of typing and navigation.

Obstacles are those frightful things you see when you take your eyes off your goal.