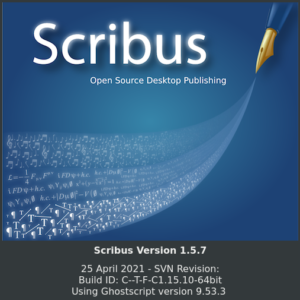 Scribus is a maturing publishing tool which has much to like. The upcoming (when? who knows?) release of 1.6 should put it squarely in direct competition with Adobe Indesign, it's proprietary competitor. Scribus is free and open source software, developed with love. However, there is one bad part, which is the development lead who believes that new versions (e.g., 1.6) should be released over several years, rather than several months. Too slow for my tastes, though they are doing incremental releases at a faster rate, and frankly it is a nice piece of 'ware.

Contents
When and Why to Use Scribus
Scribus Resources

When and Why to Use Scribus

Scribus fits in between a few different document niches, and is specifically a desktop publishing layout editor. Other document editors which are different enough, but useful for comparison:

For example, all four of these can create PDF files, that can result in a book or other printed or digital material. However, Scribus excels at doing complex but repetitive layout and having text flow across pages.

Scribus is pretty good and should be tried out. It is the future (and possibly current) replacement to Adobe Indesign. Along with GIMP, Inkscape, and Blender, the Adobe Suite or so-called Creative Cloud can be retired. I personally have not used any Adobe software since 2010 (and any Microsoft software since 2007, with the exception of Github which is now owned by Microsoft).