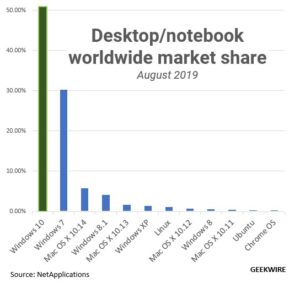 Apparently as of mid 2019 Windows 10 has 50% market share and Windows 7 has 30% market share (of worldwide OS usage). The suggestions to Skip Windows 8 was taken globally.

Microsoft did not release a Windows 9, and is now staying with Windows 10 and providing twice-yearly updates (and monthly bug fixes). This is going to outpace OSX development, just as OSX development outpaced Windows development by increasing the tempo.

Twice yearly is a good pace, and one taken by the likes of Ubuntu. Ultimately rolling releases should become more viable and popular.

Remember Vista? That version of Windows most people were able to avoid, or quickly uninstalled? Yeah. Windows 8 may be that kind of system. Windows 7 Service Pack 1 is fairly stable, so for Windows XP people, time to upgrade. For those who might need a computer in the next two years, better buy that now. Why? Because Microsoft is prepared to shove Windows 8 into every nook and cranny it can. Get Windows 7 while you can.

Vista was not bad in theory, but in practice it was horrible. Having become fed up with the daily security incident, they redesigned the system to have security throughout. This made it impossible to run programs which were not designed this way, especially those programs which would be vectors of attack, such as anything with an Internet connection. This essentially meant that Microsoft tools and utilities and much of the operating system was a version 1.0 release. And we all know how good Microsoft is at 1.0 - particularly bad.

Well folks, Windows 8 has many of the same characteristics, a 1.0 release which in theory may not be bad (and they don't have much of a choice from a competitive perspective) but can become a disaster of delayed upgrades or painful re-installations and rollbacks, in practice.

The key is to buy something now, something built for Windows 7, but with enough performance to get you through the next two years and into mid 2015, when we will know if Microsoft will have something better out, or if we will all be mainstreaming Ubuntu 15 by then.

Oh, and make sure whatever you buy can run Ubuntu now. Because that is what this device should be able to do: dual-boot Win7 and Ubu12.

Bootcamp or VMware for OSX-only Crowd

Sure it is possible to run Windows7 as a virtual machine inside of OSX or Linux, but this solution to get a computer now is to take care of people's PC needs. But the real reason has to do with the desire also to leave the super-expensive Macintosh machines behind as well. Let's be serious.

Another option is to buy a few extra licenses of Windows 7 in order to prepare for a downgrade later. But this means there will be hardware that won't be tested on Windows 7. No, best to get something that is ready and tested on Windows 7, but is not necessarily top-of-the-line. Something that will help mitigate the risks that Windows 8 poses to an organization and to individuals.

With that in mind I ventured to my local PC vendor and lo and behold found an Asus UX31E for 26,900 THB. This meets the specifications above with 128gb SSD and i5 processor. Essentially this is a MacBook Air competitor, which comes in at 39,900 THB. This means the Asus is about 68% the price of the Mac. Yup, save 32% or nearly 1/3 the price. Wow. Predatory pricing Apple.

Daring ideas are like chessmen moved forward; they may be beaten, but they may start a winning game.